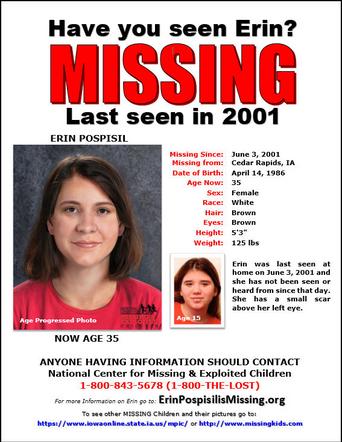 Jody Ewing with Iowa Cold Cases has investigated Erin's story and provides additional information, Videos, Sources, References, and Other Articles on Erin.  She brings up several questions regarding the disappearance of Erin.

Erin was 15 at that time.  That evening she left home at around 8:45 pm to go to a friend’s house (Brit’s) to watch movies.
​It was the first weekend of summer vacation.   They were excited about the first “Summer Monday”.  The girls were planning a friend’s surprise party to be held on the upcoming Thursday.

Erin got a ride over to Brit’s house.  Curtis, a friend of Erin’s older brother, was leaving at the same time so he agreed to give her a ride.  When they got to Brit’s house, no one answered the door.  (Turns out that she had “run to the store” for chips and soda.)  As Erin was walking back to Curtis’ truck, a dark colored  Chevrolet Cavalier with tinted rear windows car pulled up to the curb.  Erin went up to the car and had a short conversation with someone in the car. She told Curtis, “These guys will give me a ride.”  Erin got in the back seat.  No one has seen or heard from her since.

On June 6, 2001 Erin was reported missing to the Cedar Rapids Police Department. Since the friend who witnessed her departure said Erin seemed to know the people in the car, the Cedar Rapids Police made the decision to classify Erin as a runaway. They discounted the fact that Erin did not take her day-timer, make-up case, backpack, clothes or any other belongings with her.  That silly day-timer went everywhere with her.  My most social child, Erin never went more than a day without talking to her closest friends.  It has now been nearly 1000 days.  But maybe she did runaway.  That sure seems better than the alternatives.  But as a parent, my gut tells me that she didn’t.

Early leads that were furnished suggested that Erin’s disappearance might be related to Cedar Rapids and Chicago Gang activity and an area of Chicago referred to as “ghost town”. We found “ghost town” and detectives have talked to members of the allegedly involved gang. Nothing has come out of this.

Our one reliable sighting came in the spring of 2002.  Erin was spotted at a convenience store in Cedar Rapids.  She was riding in the back seat of a car with Illinois license plates. This tip was provided to Cedar Rapids Police, however the car was not found.  We have never been able to verify the sighting.  The person who sighted her knows her well and is still convinced that it was her.  This was a “ray of hope” to hold onto.

For more on Erin's story go to WHAT'S IN A LABEL?